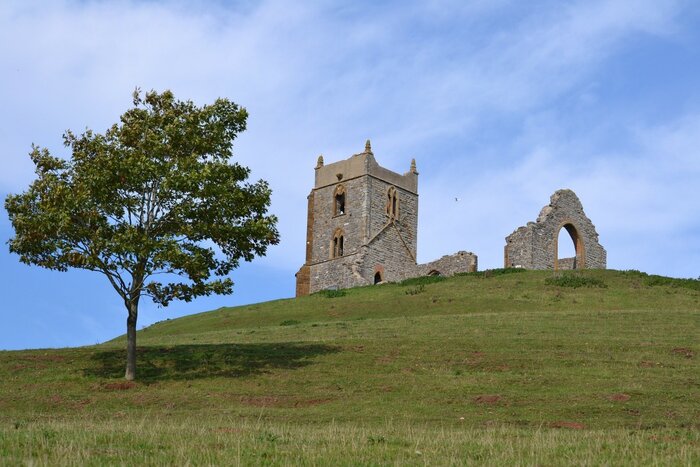 Burrow Mump is a unique point of the Somerset landscape. The 24-meter hill is unusual because it’s standing in otherwise flat terrain.

But, the mount is natural. What makes the slope even more striking is a medieval church, which stands on its top. The charming ruins belong to St Michael.

Alexander Gould Barrett gave this property to National Trust in the 20th century to be used as a war memorial.

It makes sense because this area attracted many conflicts in the days when King Alfred had a base near Athelney. He used to engage with Danes.

During the civil war, Royalist troops took shelter in the church for three days while their colleagues in Bridgwater surrendered to the parliament army.

A soldier is buried in this church. Probably he was killed by a musket shot.

Archaeologists found Roman pottery at this site. They also unearthed remains of the right-angled wall to the church. For many years the church was interpreted as Normal Castle. But, the idea was dishonoured because there is no evidence to prove that it’s a castle.

You can enjoy terrific views from the top of Burrow Mump. You can even see Glastonbury Tor and Wellington Monument. But, only on a clear day.

So, you can put some effort to climb it. If you want to enjoy some of the fantastic sights in Somerset, then visit the mump. If the weather is misty, its silhouette rises above the sea levels, which looks haunting but attractive.

How to get here?

Burrow Mump is located in Burrowbridge, which falls between Taunton and Glastonbury if you follow A361 road. First Bus services have the route from Taunton to Wells. Bus number 29 can get you to Burrowbridge. If you are travelling by car, there is a National Trust car park at the base of Burrow Mump.